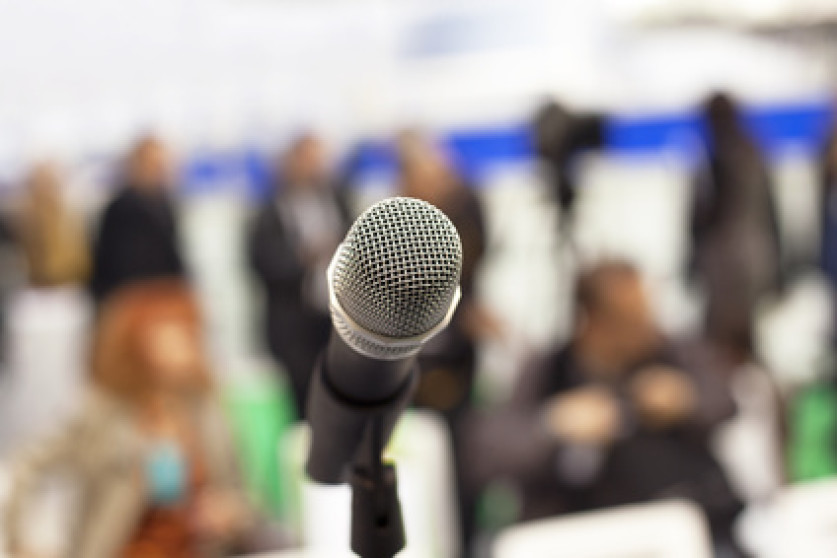 A fear of speaking and presenting is enough to stop many people even trying to speak in public. However, your body’s natural reaction to speech anxiety (a lesser form of fear) puts you in a great place to perform a speech.

Making the transition from fear (as a barrier) to anxiety (as a benefit) takes place when you practice and experience the art of speaking.

The vast majority of clients who approach me for advice on public speaking and presenting have one thing in common. FEAR

There’s often no logic to their fear, but a fear of speaking is all too common. If you try to reason with them (you can speak comfortably to one person, perhaps even a small group, so why can’t you speak to a room of 100?) it rarely gets round that mental block of “I could never do that”.

The fear of public speaking even has a name, glossophobia (it’s actually speech anxiety but we’ll get to that in a moment). Many surveys have listed this phobia as the number one, most scary thing you could do. Even more scary than death. You’ve probably heard the anecdote about it being easier to be in the coffin than deliver the eulogy! Regardless of just how scary an experience speaking is, few would dispute that it is certainly scary.

So if we accept that there is a fear associated with speaking, how can that fear possibly be the speaker’s best friend?

Let’s first look at our body’s natural reaction to fear. Starting with a neural response in the hypothalamus, a series of reactions result in the production of the hormone cortisol which increases blood pressure, blood sugar, and suppresses the immune system. This creates a boost in energy, preparing the body for action. Often referred to as ‘Fight or Flight’, it’s an inbuilt survival mechanism.

This natural reaction to fear often results in the following physical reactions,

Most people who have jumped in and tried speaking will recognise a few of these!

These physical reactions send further confirmation to the brain that the body is in danger. Your fear self-perpetuates.

I mentioned earlier the difference between fear and anxiety, and whilst the two are closely linked, they are different. Fear is a reaction to a certain definite threat, whereas anxiety is the reaction to a possible threat.

The reason most people fear speaking, is because they’ve never done it.

Their brain believes all the hype and convinces them that their fear is well placed. Speaking MUST be a dangerous activity.

Whilst I don’t agree with this viewpoint, it’s easy to see why people feel it. I often see outwardly confident speakers stride up to the stage at events, put their notes on the lectern, look up and immediately freeze. That initial combination of bright lights and the focus of attention from a few hundred expectant eyes is enough to scare most people.

That’s fear and it won’t move down to being anxiety until you’ve convinced yourself that the danger is only a possible, not a definite. That comes after you’ve actually experienced it.

Please don’t get me wrong here. I’m not advocating that all rookie speakers find the biggest audience they can and experience the fear of trying to speak to them. Slow and steady does it. Start with one to ones, progress to small groups and gradually make your way up to the bigger audiences. Every time you speak, your brain throws another switch to say “I’ve been there, done it and so the danger, which was only a possibility, didn’t materialise”.

When Anxiety Starts to Help

The stage when a speaker starts to gain experience and transitions to anxiety (not fear) is when it gets exciting. A great speech has drive, enthusiasm and passion. When your body senses anxiety, it moves to a heightened state sensitivity in preparation for the ‘fight’. In our case that’s the performance and your body is well prepared for an energetic delivery.

I believe a quotation attributed to Dale Carnegie says that a speaker who is as cool as a cucumber will be about as exciting as a cucumber. Using your anxiety helps to overcome this.

If anyone ever tells you that speaking is easy, they’re either trying to fool themselves or they’re just plain deluded. A speech without anxiety is potentially dull and boring. My strong recommendation is to embrace the energy that anxiety provides and channel it into a stunning performance. The more you do it, the better your control will become.

If you’re still not convinced and can’t get over that initial transition from fear to anxiety, watch out for our upcoming post on overcoming nervousness.